Designing and developing globally scalable, reliable and affordable cloud services presents challenges to the Software Engineers attempting to create these services and to the industrial organizations attempting to adopt these highly modular cloud services. At Snapfix I strive to create the optimum software and team architectures to facilitate the development of our SaaS service. I’ve also encouraged our team to keep in mind the struggles that our customers face when striving to configure their business units and teams, so that cloud services can be integrated into their organizations.

This dual struggle to develop or consume cloud services has centred on the relationship between the teams developing or consuming these novel cloud computing services and the technical structures of the services themselves. The Mirroring Hypothesis contends that the communication structures within teams will mirror the technical artefacts they are creating and consuming. Within this series of blog posts, I investigate the relevance of the Mirroring Hypothesis in the emerging cloud computing era with an emphasis on how Snapfix has and is adapting when developing our rapidly growing software service and how our customers are adopting the service.

There are two distinct streams of research and development when it comes to Mirroring. The Computer Science literature examines the Mirroring Hypothesis (often referred to as Conway’s Law) from the perspective of the software engineering teams building software artefacts and how their communication links (e.g. connections, collocation, employment) affects the architecture of the finished software artefact. The Organization Science literature examines it from the perspective of the organizations adopting modular services (or any modular technology) and the effect these artefacts have on the communication links of the business units, departments or teams that consume these services.

The figure below illustrates the differing focus of the two research traditions. At Snapfix we are primarily concerned with the Computer Science tradition when it comes to structuring our teams. However, I also pay close attention to the organizational science tradition so that we make Snapfix as easy as possible to adopt for our prospective customers within the industry verticals we’re targeting. 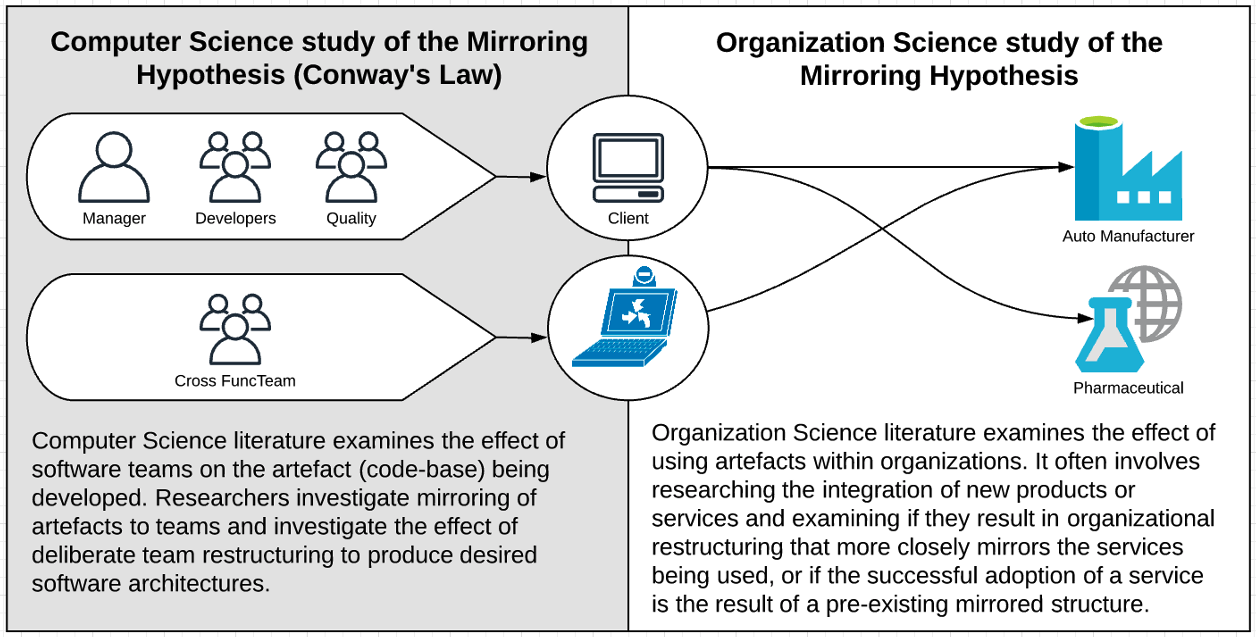 The Mirroring Hypotheses is relevant to complex modular organizations. Cloud computing is highly modular in nature. Despite the apparent relevance of the Mirroring Hypothesis to cloud computing, there is limited coverage of mirroring of cloud computing within the Computer Science literature and almost no direct coverage of mirroring of cloud computing within the Organizational Science academic literature. However, over the past 4-5 years I’ve noted a steady increase in the number of cloud architecture insiders that are paying increasing attention to Conway’s Law. Even a superficial examination of Spotify’s, Netflix or Google’s team and technical makeup reveals a close adherance to what Conway expressed in his research (explained later in these blog posts). I’ve focused my own research on the creation of cloud services by software firms and the adoption of cloud services within general industry as illustrated in Figure 2.

I’ve explored the Mirroring Hypothesis from both perspectives with a focus on SaaS cloud computing. I’ve examined the creation and usage of cloud based software services from the perspective of the software teams building the software services and from the perspective of the organizations that consume those services. I’ve tried to strike a balance by considering the social aspects of cloud computing, rather than just leaning on the technical details.

Innovation is a strong driver for firms to adopt SaaS services such as Snapfix. Avgerou, (2003)1 describes innovation as “the change of organizational practices and the acquisition or construction of technology artefacts”. By introducing the Snapfix cloud service into different verticals we can enable firms to increase their IT flexibility while reducing costs and enjoying more secure IT infrastructure23. Adopting new technologies can require the coordination of multiple groups within a firm4. The mirroring of new technical artefacts across these groups has been studied within the engineering and organizational literature5678910. There is a paucity of (published) research on the Mirroring Hypothesis application to cloud computing based innovations such as Snapfix and this has motivated my examination in this series of posts.

Why do some organizations adopt cloud computing services with ease while others find it difficult to make the transition from an internal systems based model to a more modular service based cloud computing model? This question is critical when considering how to design the Snapfix service so that it can be more easily adopted by mainstream or even ‘laggard’ verticals and firms. At this point in our evolution (Nov/Dec 2020), we have a high degree of confidence that early adopters and those firms already embracing cloud services can easily adopt Snapfix. Although as our CFO Fergus McLaughlin has noted internally, despite our focus on easy adoption, some sporadic users still find it difficult to adopt the service. The focus now is on continuing our design and simplification drive to make Snapfix more accessible.

To address this topic I conducted an embedded case study by collecting and analysing archival data of cloud computing service creation and adoption. In order to narrow my focus, I rejected any reports, interviews or journal papers that didn’t have at least an indirect focus on Conway’s Law/Mirroring. These reports included accounts of socio-technical changing leading to the adoption of the services11. I performd an in-depth analysis of over 40 academic papers published from 2012 to 2020, reporting organizations creation, adoption or transition to public and private cloud computing. The majority of these sources were not explicitly researching the Mirroring Hypothesis, but containd enough detail of the organizational and technical characteristics so that analysis revealed support or opposition for mirroring of cloud services within the empirical data. From my embedded case study, I observed strong support for Conway’s Law while creating cloud services and substantial support for the Mirroring Hypothesis while adopting cloud services with some exceptions noted particularly within open source projects or within organizations embracing open innovation. From the development perspective, there was a noted breakdown in mirroring when organizations developing cloud services were transitioning from a single team structure to a multi team structure, with mirroring restored once they reached a greater scale. I’ve experienced this phenomenon on several occasions when I was undergoing similar transions within software project that I’ve managed internally for Snapfix and indeed for other organizations in the past such as Panasonic, Analog Devices, Boston Scientific and Nortel Networks.

My empirical analysis draws on Conway (1968)7 and Thompson, (1967)9 Mirroring Hypothesis, which was further developed by organizational scholars such as Baldwin & Clark, (2000)5, Colfer & Baldwin (2016)6 and the prolific Computer Scientist David Parnas (1972)12. I haven’t come across any similar discussion and these blog posts should extend the general understanding of the Mirroring Hypothesis by applying it to the emerging use of cloud computing within complex modular organizations. I believe I’ve demonstrate its potential as both a recommendation and prediction tool for creation and adoption of cloud services.

In the remaining posts within this section I discuss prior industry and academic literature on the Mirroring Hypothesis and cloud computing. I outline my theoretical framing and explain my research methodology and data collection strategy. I then elaborate on my research and analysis choices and discuss my findings. Finally, I comment on my contribution and the limitations of this study and provide concluding thoughts on extending the Mirroring Hypothesis for SaaS companies such as ours and for industry partners that are adopting SaaS services.